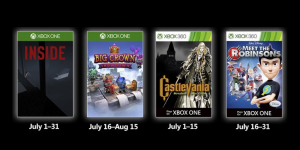 Microsoft is back with another batch of free games for its Xbox Live Gold subscribers. As usual, there’s something in the lineup to please every type of gamer. All of the games are playable on Xbox One (thanks to backward compatibility), and two are for Xbox 360. Here are the free Games with Gold July titles you can download starting today.

Available 1st to 31st July on Xbox One

This 2D puzzle platformer immerses you an eerie and intriguing world where something truly evil is going on. You’re mysteriously drawn to the center of the madness despite the dangers that lurk behind every corner.

Available 16th July to 15th August on Xbox One

Your friends will become your enemies in this multiplayer brawler that takes place across three medieval worlds filled with wacky mayhem. Up to 4 players can play locally, and many more can play online!

In Big Crown: Showdown you’ll attempt to eliminate your opponents by knocking them off an array of different courses. But watch out… each map is filled with perilous hazards that look to do the same to you!

Castlevania: Symphony of the Night

Symphony of the Night is a single-player game in which you’ll work to uncover the mysteries of Dracula’s castle in this iconic series’ 2D platformer style. Unlock new areas, discover hidden rooms, and equip hundreds of different weapons as you fight to save the world from Dracula’s dark embrace.

Based on the movie of the same name, Meet the Robinsons is a fun-filled adventure that’s great for the whole family. Travel to the past in order to help Wilbur Robinson save the future!

Take your online experience to the next level! Free games aren’t the only good thing about a Games with Gold July subscription. Here are some of the other features that come with upgrading to Gold: