The Hulk is an ideal leading man for big, explosive, action-packed video games. Sure, he’s been through plenty of changes over the years (including other characters taking on the mantle, such as the present Totally Awesome variation), but at Hulk’s core, he’s always a massive, almost-indestructible beast with a great knack for destroying pretty much anything in his path.

We may like our superheroes more psychologically-complex and nuanced than ever today, but sometimes all you want to do is punish the world for giving you another hard day at the office – and stepping into the Hulk’s metaphorical shoes is the ultimate way to let off steam.

While there isn’t a huge number of games based entirely around the Hulk, he’s still shown up in various releases over the years. Let’s check out his best appearances so far … 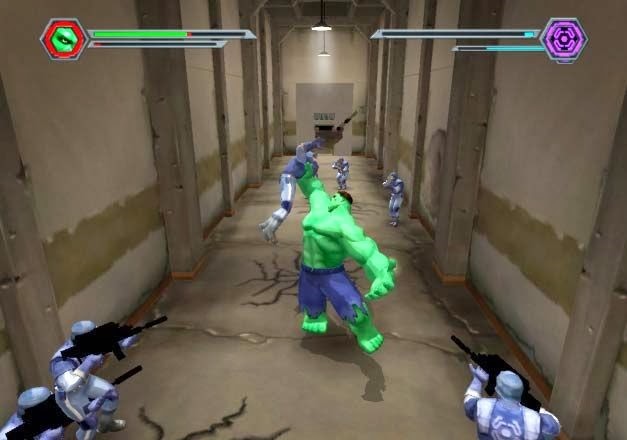 This 2003 game was released to tie-in with the infamous Ang Lee movie. Hulk isn’t actually a bad game at all, despite having its fair share of detractors – okay, so it might be repetitive and frustrating at times, but it’s well worth playing for fans.

By far, the most unpleasant parts of Hulk are the infuriating stages revolving around Dr. Bruce Banner. Eric Bana (star of the movie) voiced the character, which may explain these sections, but they’re pretty unforgiving. The last thing you want when you come to an Incredible Hulk game is being told you have to sneak around and take enemies out without being noticed.

You actually feel pretty monstrous and unstoppable as you’re tearing through hordes of enemies as the Hulk, and the challenge mode gives you reason to keep playing outside of the main campaign. The inclusion of Hulk villains – the Leader, Ravage, Half-Life – make this feel more epic and part of the Marvel universe than the movie did, too. 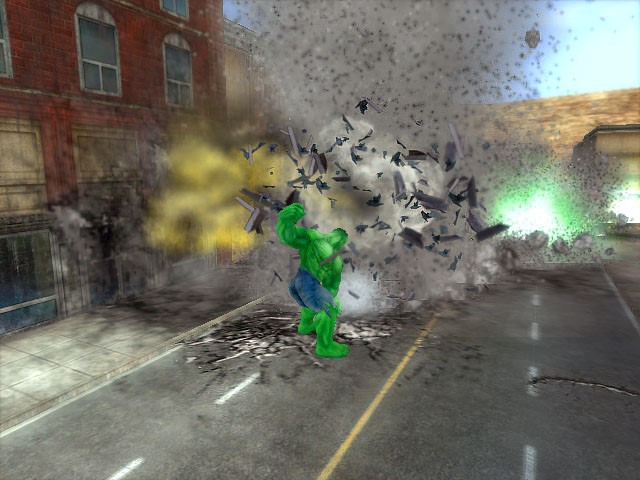 This game is absolutely Hulktastic.

Ultimate Destruction hit the market back in 2005, and was a huge step forward from previous Hulk games. You’re not forced to play through painful stealth sections as Dr. Bruce Banner, unlike in the 2003 Hulk game – it’s just big green action all the way.

You get to run through thriving city streets, surf on buses, use cars as fists, and play a spot of impromptu baseball with nothing but a lamppost and an unassuming pedestrian. Fancy getting out of town for a while? Go for it – there’s mile upon mile of sprawling desert to explore too!

Sure, The Incredible Hulk: Ultimate Destruction might get a tad repetitive as you progress, but it makes such great use of the character, it’s hard to complain.

The voice cast is top-notch, too. Ron Perlman and Neal McDonough show up as Abomination and Banner respectively (McDonough voiced the character in the 90s’ animated series), adding a touch of gravitas to the dialogue.

Smashing buildings to rubble, throwing tanks, and fighting enemies in mech suits all give this an epic feel. There’s also the GTA-esque rising response levels based on your actions, with ever-increasing firepower coming your way. 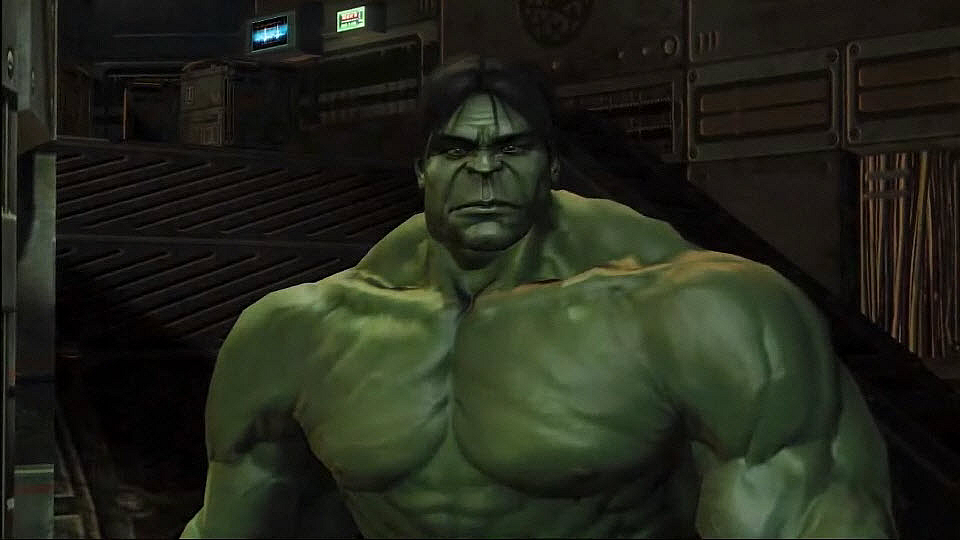 Your experience of Marvel: Ultimate Alliance 2 probably varied depending on how you played it.

The version released on PS3 and Xbox 360 is a blast, but the others (on the PSP, for example) are less-impressive. This is a real shame considering how great the PSP port of the original Ultimate Alliance managed to be.

Anyway, Ultimate Alliance 2 lets you add Hulk to your team (provided you can find enough gamma canisters), and basically kick more butt. There’s not a huge amount to say on this game, but it’s a must-try for fans. 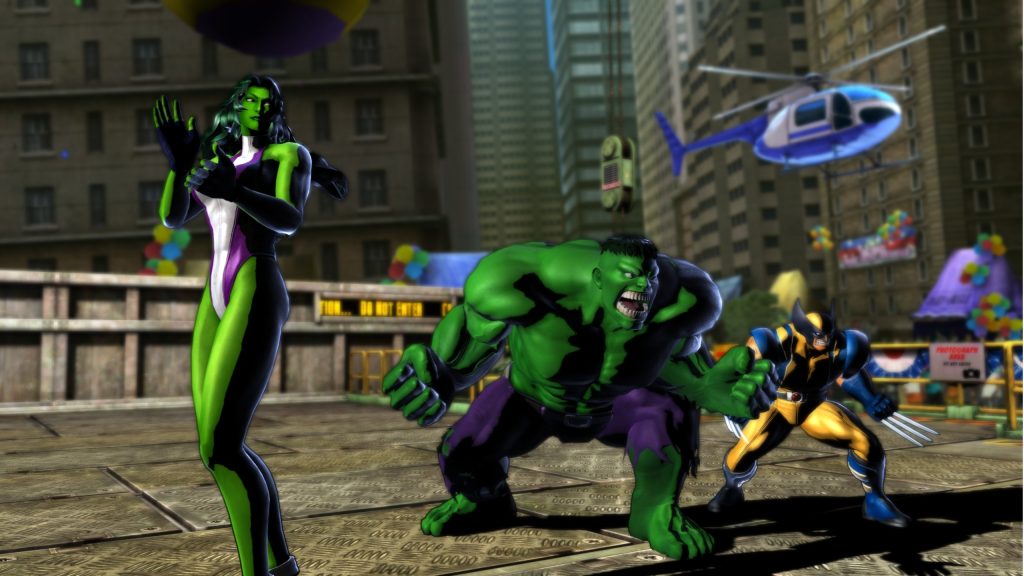 The Incredible Hulk’s a joy to play as in Marvel vs. Capcom 3: Fate of Two Worlds. You can choose his traditional green skin or others (including that awesome red), but whichever you go for, Hulk always looks fantastic on-screen – huge, imposing, right out of a comic-book.

Hulk’s strong and fast too, with some powerful moves and a terrific sense of weight: crack Ryu, Albert Wesker, or Thor over the head with a Hulk-sized fist, and you know you’re going to do some damage.

Marvel Super Heroes In War of the Gems 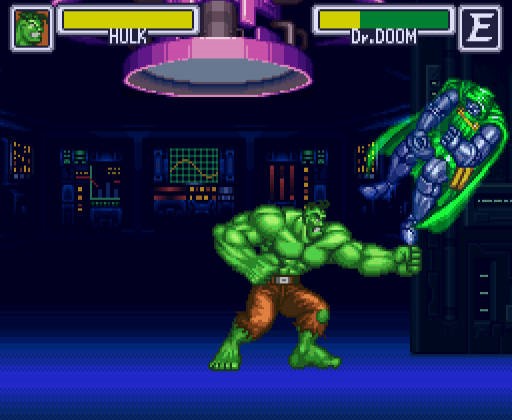 The Infinity Gauntlet arc inspired this 1996 SNES game, much as it has with the entire MCU and the forthcoming Marvel vs. Capcom: Infinite. You can play as the mighty Hulk, along with other familiar faces (Spider-Man, Captain America, Iron Man, and Wolverine), and he’s definitely one of the most fun.

Hulk’s sprite here looks awesome, with great detailing on his physique (check out that trapezius!), and you get a real feeling of power striding along, hammering enemies. He also damn near fills the screen without feeling oversized or clumsy too – probably a tricky thing to pull off! 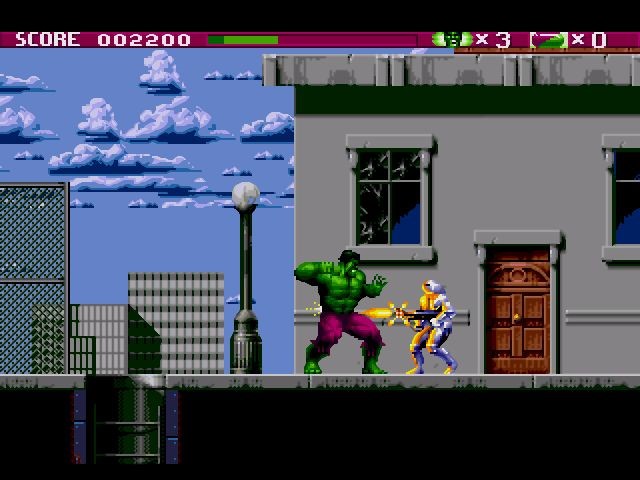 The Incredible Hulk opens with the titular green monster punching the U.S. GOLD and Probe logos to pieces as they scroll in front of him.

This is a genius way to introduce you to the game, and sets the tone for the smashy action that follows. It’s beautifully animated too, just like the rest of the game – while Hulk looks pretty small at times, his detailed body and smooth movements are incredibly impressive.

Another great feature is your ability to transform back into puny Bruce Banner, with the help of a few handy tranquillizer pills. The good doctor is pretty useless if he can’t get his grubby mitts on an occasional laser blaster, but he does have the power to access areas closed off to the Hulk.

Of course, taking a hit from an enemy makes Banner angry – and you won’t like him when he’s angry …

(Though you might, considering that’s what you bought the game for in the first place!)