Red Dead Redemption 2 is quickly proving to be one of the best games of all time. Part of what makes this Rockstar Epic so amazing is its massive open world, and the massive amount of choice you have in this intricately detailed ecosystem.

The sheer number of things you can do at any given moment can be a little intimidating to new players, and there are things you might miss or be confused about early in the game. To make adapting to this new frontier a little easier, we’ve put together this list of 5 essential tips to master your first hours in Red Dead Redemption 2.

Go here for everything Red Dead Redemption in our webstore.

While it might feel a bit time tedious due to the detailed (and enjoyably realistic) animations, looting from the unfortunate corpses you’ve slain can really earn you a lot– especially early in the game! Your fellow gang members might tell you to hurry up, but it’s well worth it to ignore them. In the first hour of Red Dead Redemption 2 there will be a massive gunfight, and, as you might expect, a massive amount of black X’s on your map that indicate an unsearched body nearby. Continue looting boxes, desks, footlockers, and even chimneys throughout the game and it’ll really pay off.

Use some of the cash you’ve just earned and head to the nearest train station as soon as you’re at your first camp spot. Buy yourself a ticket to all the main hub cities to automatically unlock them as potential fast travel locations. This will open up the map a lot faster than the main quest does (it can take 10s of hours normally) and will allow you all the amenities that these cities have to offer.

You never know how a mission will turn out in Red Dead Redemption 2. The plot is filled with so many interesting twists and turns that you’d never expect. You won’t really go anywhere without your trusty steed, so make sure you have everything you might need available on your horse! When you’re next to or on your horse you can customize the inventory of your saddlebags. You can even add items to these saddlebags by placing things in your personal footlocker at your camp. In addition to weapons, it’s important to have the right clothing, tonics, and provisions ready for whatever you might encounter on the open road.

Stock up on Dip in Red Dead Redemption 2 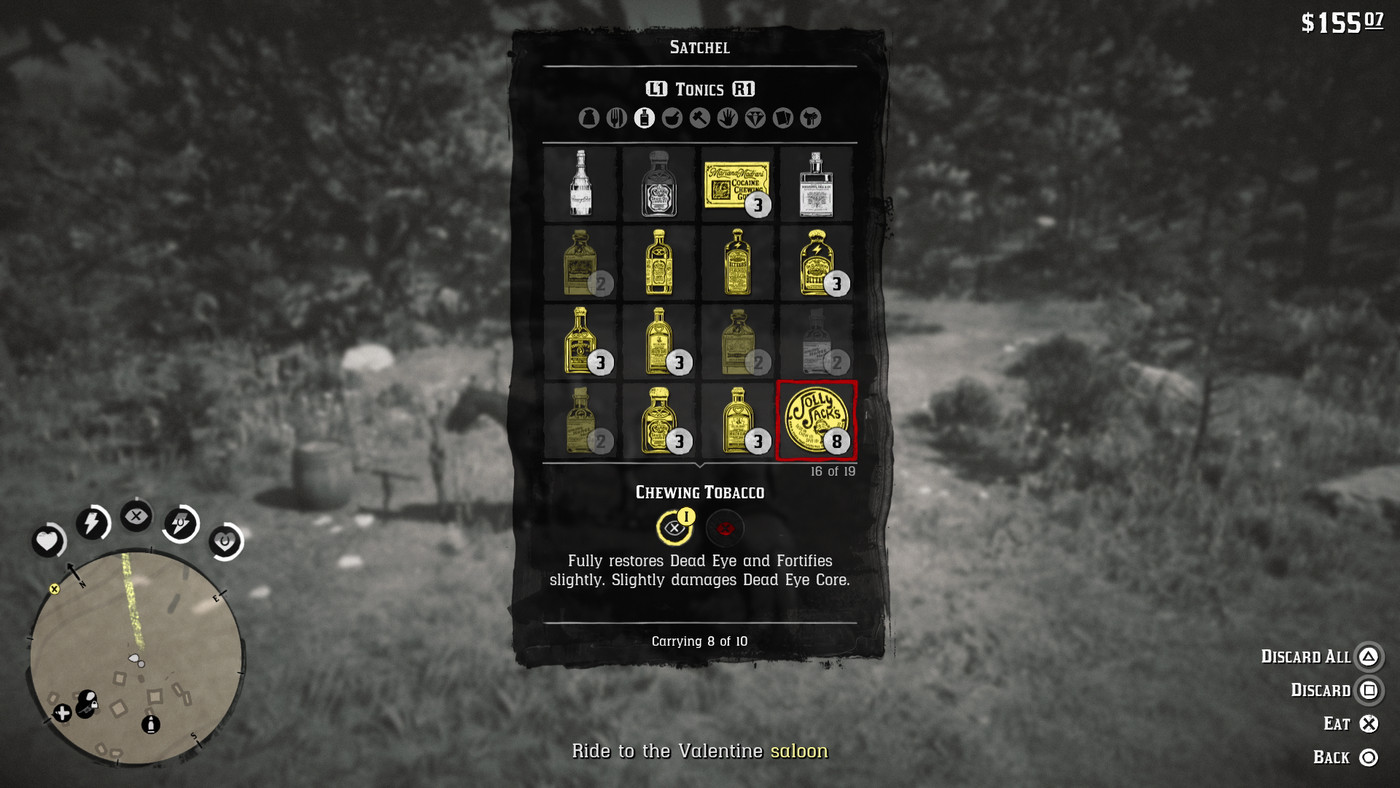 Speaking of having the right provisions; chewing tobacco in Red Dead Redemption 2 is one of the most important items you can have on you. Why? Because it fills the incredibly useful Dead Eye meter, allowing you to slow time and hit insanely accurate shots. Chewing tobacco is relatively cheap, you can carry a lot of it, and it’ll make everything you use a weapon for a lot more fun. Just try not to think about how bad it is for your health…

Appreciate the Horse You’ve Got

When you can’t have the incredibly fast horse you want, love the one you’re with! Choosing to strengthen your bond with your horse is a much better idea than spending money on a new one.  Save your money until you’re deep into the main story. You’ll eventually have access to some rare, powerful, and very expensive rides. Until then spend time pampering the horse you have, or maybe 2 (you can keep one stabled), and improving its abilities.

Pick up Red Dead Redemption 2 in our webstore, and let us know in the comments what your favorite thing to do in the game is!