Space rocks – it’s that simple. Think of some of the best sci-fi video games ever made, and chances are, you’ll get to explore space in one way or another.

Whether you’re piloting an X-Wing beneath an Imperial Star Destroyer or you’re on the bridge of the Enterprise, space is one of the most exciting, atmospheric settings for a game – especially when there are battles to be enjoyed!

There have been plenty of space combat classics over the years, but which are the best? Let’s check out the top 10 … 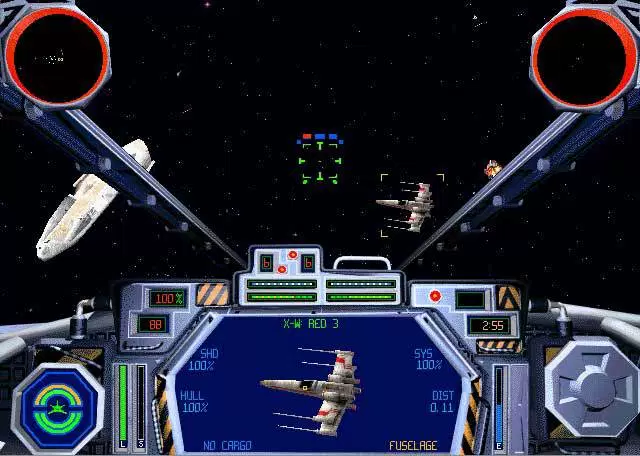 TIE Fighters are some of the coolest, most iconic ships in the Star Wars universe. Not only do they have those distinctive wings, they also make that unforgettable sound too – which makes them the ideal vehicle to base an entire space combat game around.

TIE Fighter came along after X-Wing had already been a hit, letting you step into the polished black boots of an Imperial pilot. Sure, it looks dated now, but the gameplay’s still pretty fluid, and it feels like an authentic Star Wars experience. 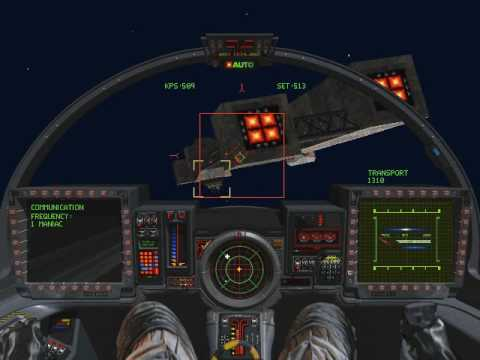 Speaking of Star Wars, Mark Hamill returned for Wing Commander III: Heart of the Tiger. This boasted some pretty impressive 3D animation at the time, and took the Kilrathi war further, expanding the universe. The live-action cutscenes might not seem quite so exciting anymore, but they helped to give the series a distinctive edge back in the 90s, with well-known faces and decent production values.

The space combat itself is still quite nice today, with a decent sense of scale and openness. The in-cockpit animations are done nicely too, with the hand-and-stick animations adding a sense of realism to it. 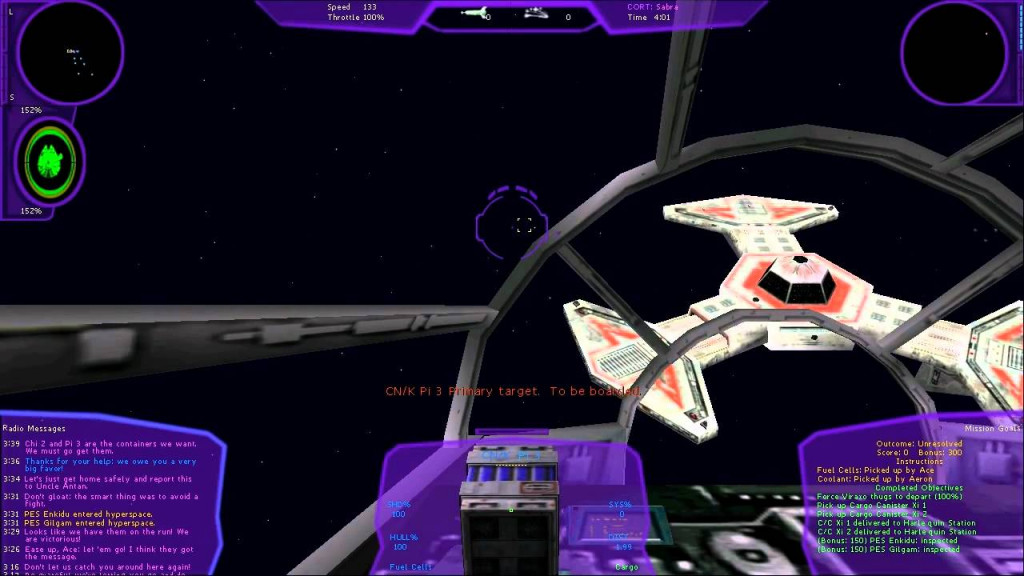 X-Wing Alliance follows a fighter in the Rebel Alliance, and was the first X-Wing game to feature in-flight dialogue, which adds more atmosphere and realism to the experience.

The physics were also tweaked to be more weighty and believable, and the multi-crew ships brought a new dynamic, with you able to sit in the pilot’s seat or man turrets instead. It really helps you feel like part of a team.

The custom-mission feature was a genius addition, too, allowing you to build your own scenarios. 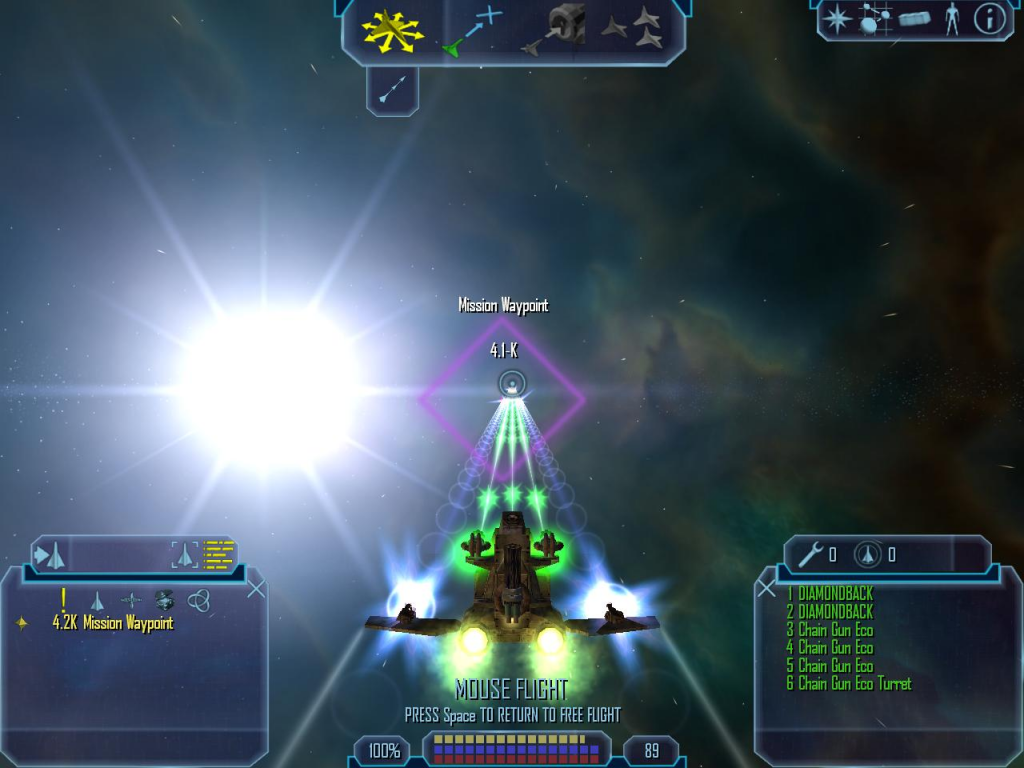 In this sequel to Starlancer, there are 48 star systems to explore, with different planets and stations. You’ll encounter enemies controlled by other players as well as AI pilots, and you can dabble in different types of work.

Piracy, bounty hunting, and trading all feature, giving you the chance to forge your own path out there amongst the stars. The visuals might have aged a tad since this was released in 2003, but the space combat is still fluid and moves along at a fast pace. If you’re looking for a deep, exciting sci-fi game, this is one to check out. 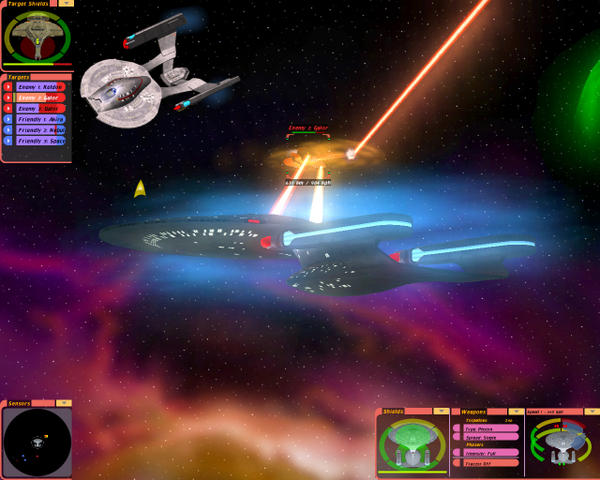 For Star Trek fans, there isn’t exactly a huge range of irresistible games out there. Bridge Commander, though, is one of the best, putting you in the most important seat on a Federation ship.

There are two key ways to play this: you can either use the bridge-centric view, which lets you interact with your crew (as in the TV series and movies), or you can play from outside the ship to control it directly. The bridge view captures the essence of being in charge, as you issue orders to different officers, but doesn’t look quite as cool as the external perspective.

The space combat looks and plays like it should, with the same sense of naval tactics and manoeuvring you’d expect. For Trekkies, this is a terrific space-combat game that nails the Star Trek atmosphere. 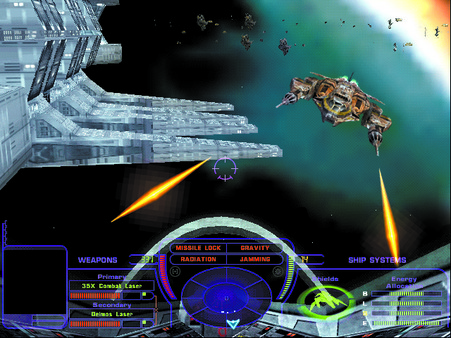 Ever wanted to zip through space as a character voiced by Evil Dead legend, Bruce Campbell? Well, Tachyon: The Fringe gives you that chance!

Released in 2000, Tachyon takes place in the 26th century, and is a fairly standard space-faring story. You play as a member of Star Patrol, and explore the titular Fringe, taking missions from the Job Board.

The gameplay’s smooth and well-designed, and captures a decent sense of movement and the vastness of space. The combat’s satisfying, with impressive effects, futuristic weaponry, and well-rendered explosions. 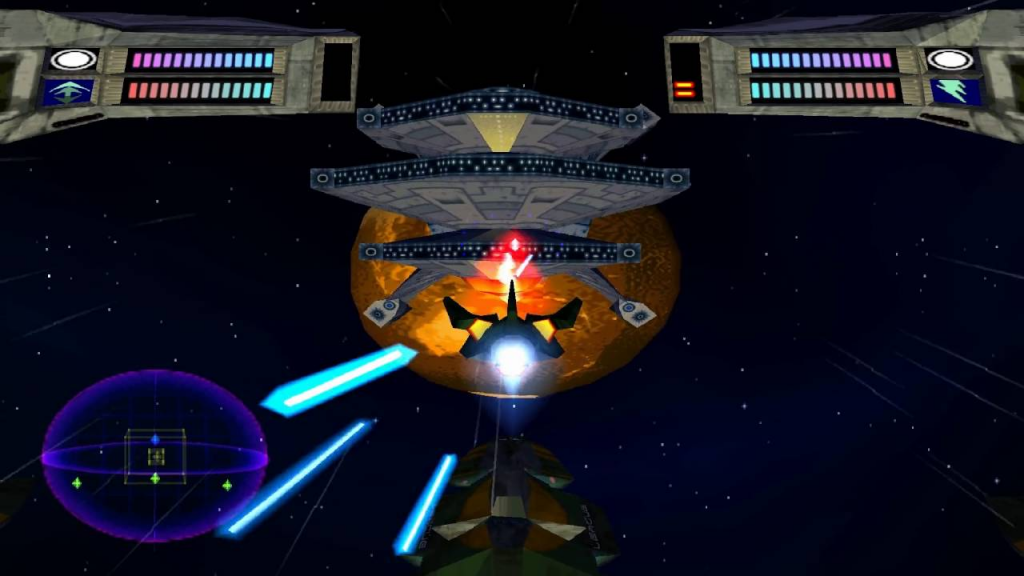 Colony Wars was developed by Psygnosis, who created a number of PS1 games, many of which shared similar (though beautiful) visuals and mechanics. With this space-combat game, Psygnosis did a great job – the soundtrack, graphics, and physics all came together nicely.

One of the more interesting aspects is the branching structure, with different paths through the game available depending on your actions. The combat itself is fast-paced and thrilling, while the sight of purple and orange plasma beams slicing through space is still fantastic today. 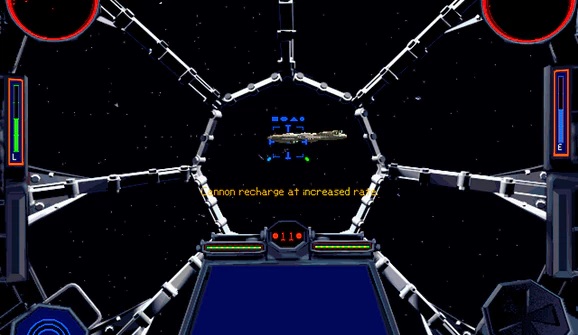 X-Wing vs. TIE Fighter was a technical improvement over the previous two games in the series, and lets as many as eight people battle it out in multiplayer.

There’s no plot here (without the expansion pack), which makes this more of a multiplayer-centric experience. Considering X-Wing vs. TIE Fighter dates waaaaay back to 1997, the visuals stand up surprisingly well, and there’s a real sense of speed.

The authentic Star Wars music and sounds help to create an atmosphere you can’t help but be delighted by. 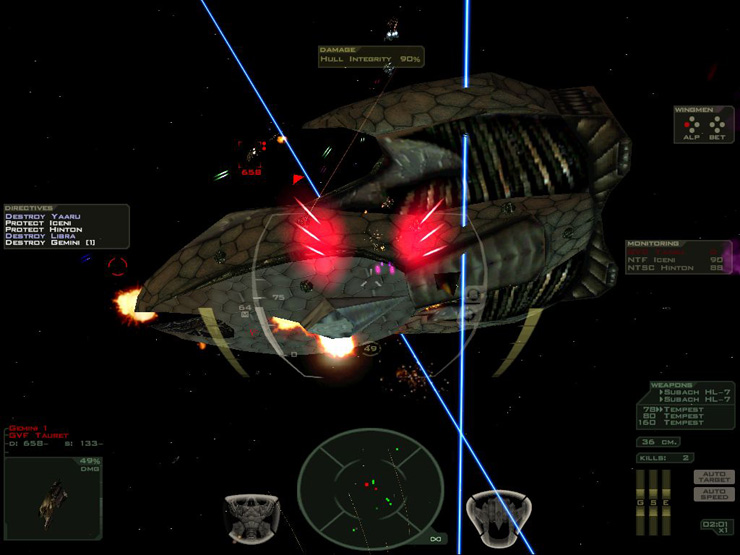 The space combat in FreeSpace 2 is massive, epic, and visceral, though it differs from some other simulations due to the weightless ships and somewhat liberal physics.

Visually, FreeSpace 2 is gorgeous, with lighting effects and explosions still looking terrific, thanks to the ongoing updates. The community mods also help to keep the game fresh, with fans basing their own projects on classic sci-fi fare like Battlestar Galactica. 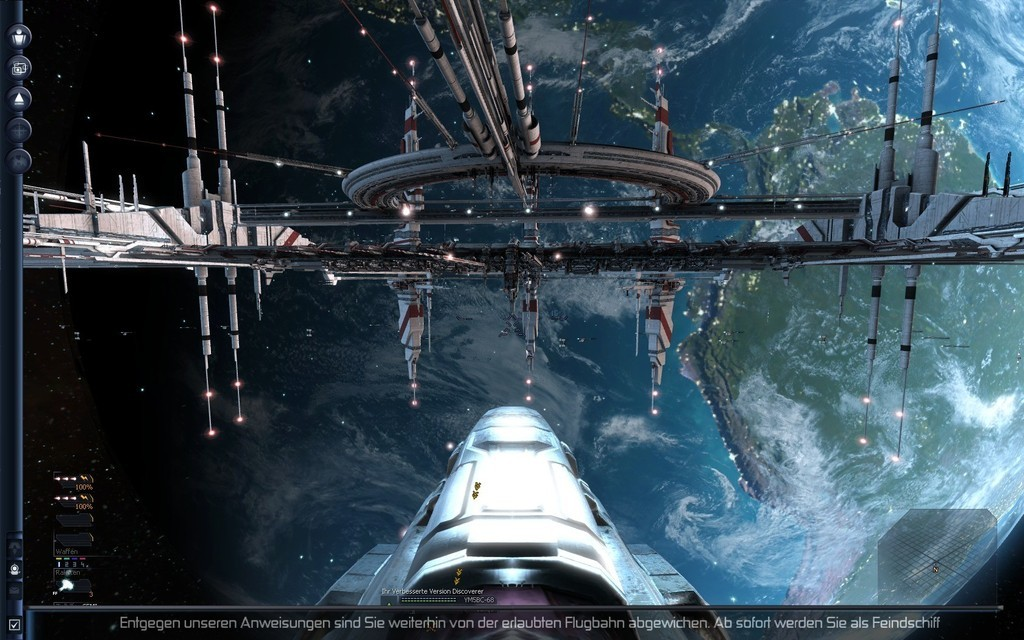 X3: Terran Conflict is incredibly deep, featuring plenty of races, a massive universe, and a fluid economy that lets you turn a profit through different means.

The space combat looks beautiful, first and foremost: space looks and feels like space, especially when you find yourself fighting in an asteroid field or just outside a planet’s atmosphere. It’s quite slow, but this only adds to the authenticity, making for an immersive space-combat experience.

What are your favourite space combat games? Let us know!