The original RoboCop, released in 1987, is one of the defining science-fiction movies of the decade (if not all time).

This gruesome tale of a murdered cop reborn as a cyborg is still beloved by many of us today, and this enduring affection only makes the lack of any current or forthcoming games starring poor old Murphy even sadder. Just think of the gorgeous open-world versions of Detroit we could patrol, stomping along cracked streets, wasting scumbags at will. It could even be a VR game!

While he’s starred in several video games over the decades (each with slight variations across different consoles), the library of RoboCop games pales in comparison to those based around other sci-fi classics like Aliens and The Terminator.

Still, let’s take a look back and see how they did anyway … 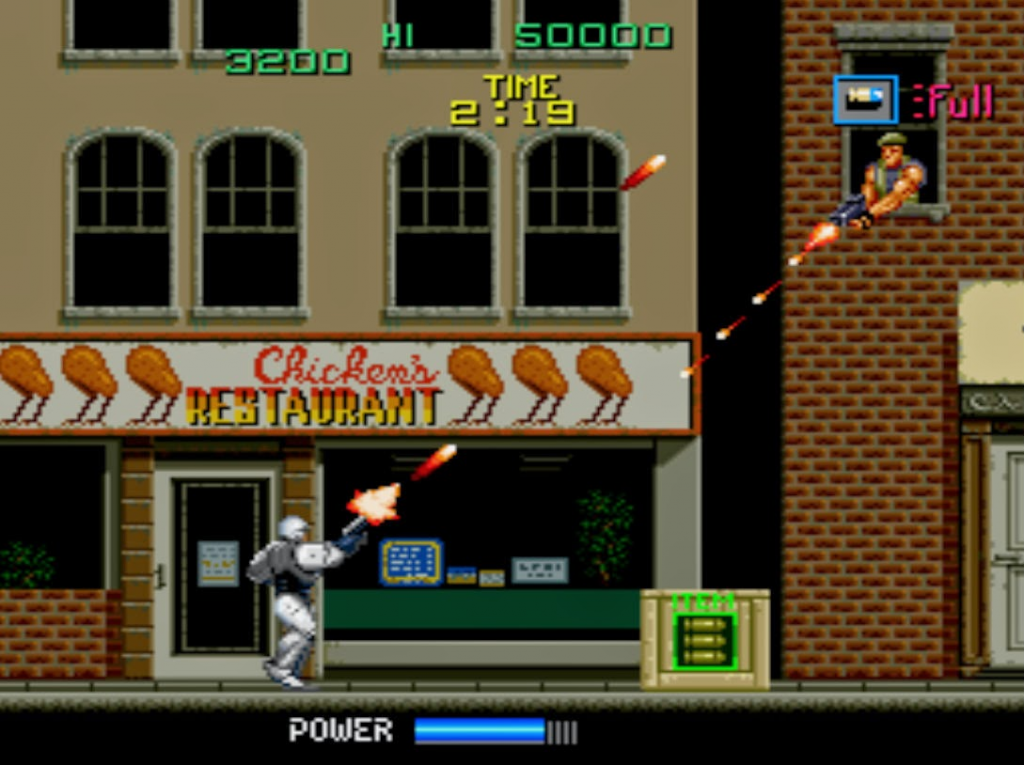 Originally released in arcades, RoboCop went on to appear on different machines, with the ZX Spectrum version particularly well-received; it even managed to stay near the top of sales charts for more than 18 months!

The arcade game itself is absolutely gorgeous, even today. It’s a side-scrolling shooter, with RoboCop packing his standard Auto-9 and larger weapons (including the Cobra Assault Cannon, as wielded by scumbag Clarence Boddicker and his cronies).

The graphics are smooth, colourful, and manage to capture the style of the movie pretty well; one of the most impressive elements is the way RoboCop takes his gun from his leg, which looks and sounds absolutely awesome. Special mention has to go to the soundtrack too, which is a more upbeat, faster version of the film’s iconic score.

The other versions of RoboCop all vary. The NES version does a decent job of recreating the arcade game, though the ZX Spectrum is obviously quite a bit different. To start with, it lacks the colour and speed, and while the music’s cool, it’s not the film’s score.

One of the most unforgettable aspects of the ZX Spectrum release? That first-person mode, where you have to shoot the thug by aligning your crosshairs properly without accidentally capping his hostage. 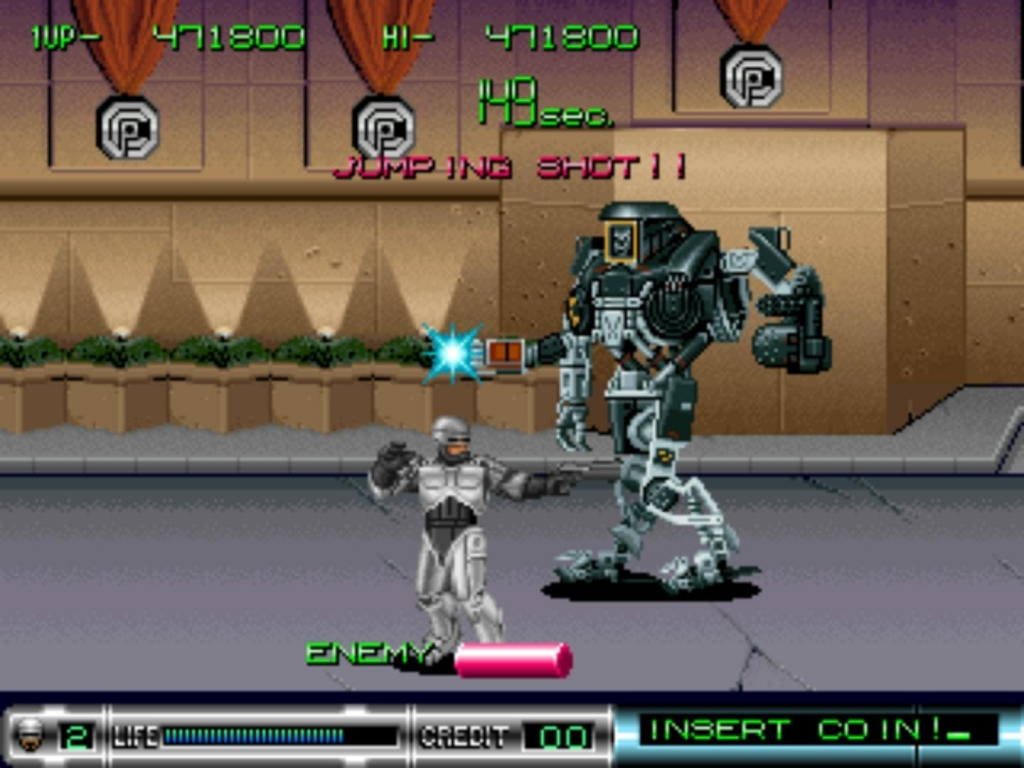 The second RoboCop movie wasn’t as good as the original, but how about its tie-ins?

The most impressive version is the 1991 arcade release, which boasts some stunning graphics that still satisfy even now. This is a fast-paced side-scrolling shooter (again produced by the mighty Data East), with gorgeous, chunky sprites and great action. As you stomp through stages, RoboCop’s gun wastes criminals with awesome power, and the heavier-duty weapons feel suitably hardcore.

The little end-of-level animation of RoboCop spinning his handgun and slipping it back into his leg rocks, too.

The arcade version also allows two players to work together, resulting in one silver RoboCop and a slightly purple one.

What about the other versions?

There was a release for the Commodore 64, a basic platform-shooter that’s just as colourful and fun as you’d expect it to be; the NES version was similar, with brighter visuals and bigger sprites.

Versions were also released for the Atari ST and Amiga, which have superior graphics but similar platform-shooter gameplay. The ZX Spectrum RoboCop 2 is slow-paced, but has decent visuals.

All in all, though, the arcade version is the one to try. 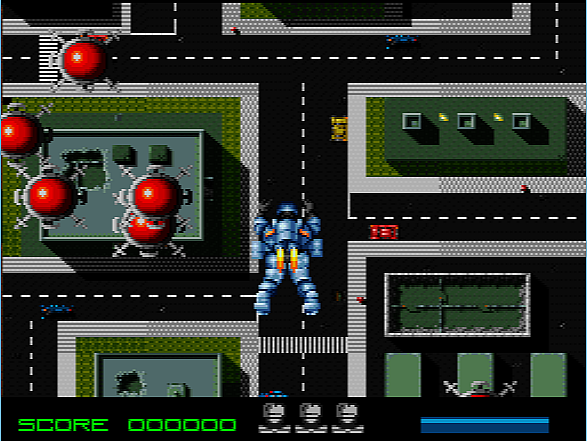 By the time RoboCop 3 rolled along, the series had lost its bite and become far sillier than that first movie had ever been (all because the studio behind it aimed for kids, kind of missing the point of what attracted those younger viewers in the first place).

The SNES version of RoboCop 3 is pretty notorious for its insanely-high difficulty, and the ability to inadvertently destroy your own power-ups before you collect them makes for some painful mistakes.

Still, at least it looks great.

There’s variety, too, with levels split between side-scrolling shooting and flying segments (viewed from above). The Genesis release is pretty much identical.

Meanwhile, the NES version is far more accessible and well-balanced. One great feature sees RoboCop’s body split up in terms of damage, causing different parts to malfunction if they take too much harm. Being able to repair them between levels gives the game a bit more depth, too.

RoboCop Versus The Terminator 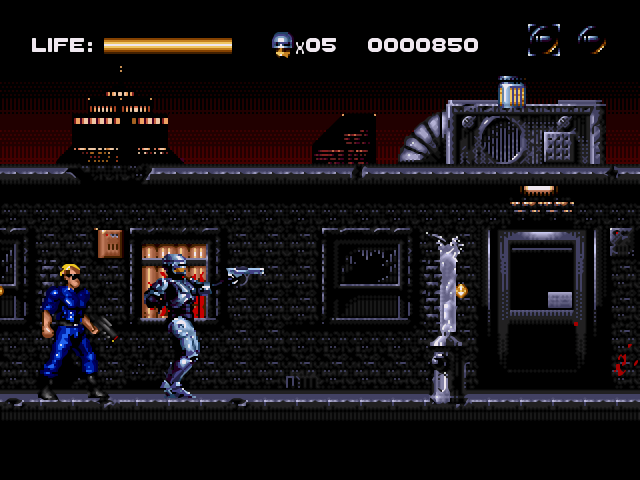 This is based on Frank Milller and Walt Simonson’s four-issue crossover comic-book, which does an awesome job of bringing two different franchises together in a way that makes total sense. While the Genesis version gives you a taste of the story at the start, the SNES actually has narrative scenes between levels, featuring comic-book panels and text boxes.

Still, the SNES version has a slightly different look and feel to the Genesis one, most notably in the lack of violence, as well as a first-person level. The futuristic stages are impressive, too, with a battle against a Hunter-Killer a real highlight.

The Sega Genesis / Mega Drive version of RoboCop Versus The Terminator is an absolute classic. The soundtrack, the graphics, the animations, the level design, and the weapons all work perfectly, making for a game that’s endlessly replayable. It feels more fast-paced than the SNES version, too.

On top of that, it’s also bursting at the seams with gore. Watching criminals and assorted scumbags explode in a bloody mess is great fun, and makes you feel just as powerful as you should when playing a RoboCop game.

The NES version is totally different to both of these, with much smaller sprites and maze-like levels. The Master System version actually does a decent job of recreating the Genesis release, though it’s far less polished. The same is true of the Game Gear port, though the Game Boy version is far more ropey. 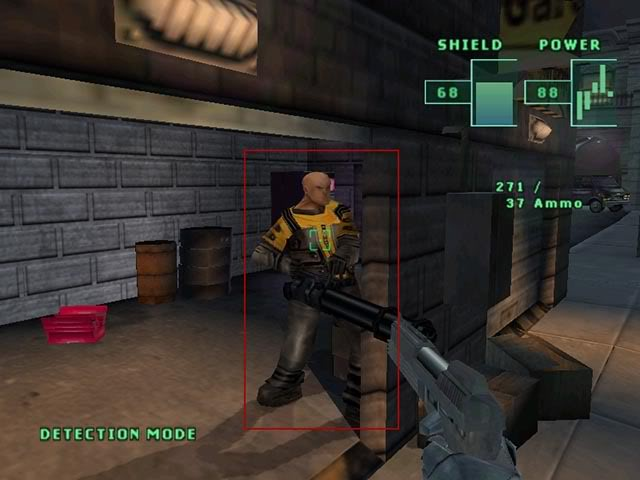 Now then: did you ever play this?

If you did, you’re unlikely to have forgotten (no matter how hard you tried). RoboCop’s 2003 outing is considered one of the worst games ever made, even compared to the infamous Superman 64 by some (which was actually made by the same developer, Titus).

This should have been great. An FPS with the then-current technology could have worked brilliantly, but instead it’s just a bland, bug-laden mess. Enemies wander through walls, RoboCop utters lines that seem way out of character, and the graphics don’t exactly show the respective systems off at their best. 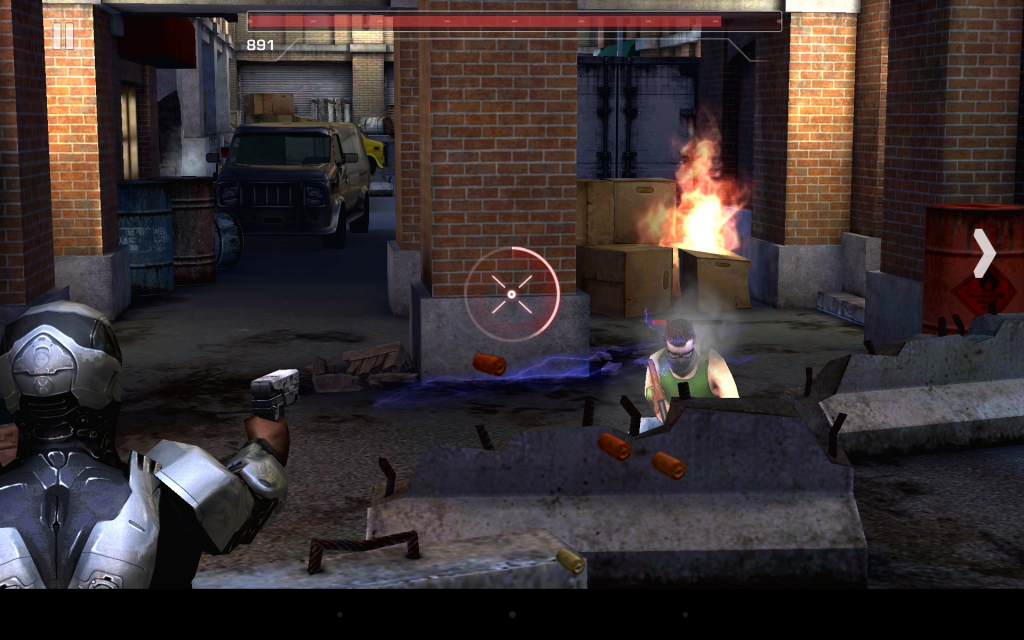 The RoboCop remake has its strengths, and does enough differently to avoid being a total by-the-numbers copy, but it’s pretty forgettable. There’s little reason to watch it when you have the original.

Still, the tie-in mobile game is impressive. It’s a cover-based shooter, tasking you with icing enemies simply by popping up from behind scenery. You also have to face ED-209, which is always a plus.

The graphics are stunning, the gameplay’s smooth, and best of all? It’s freemium, so only costs you if you want to spend! For a taste of modern RoboCop action, this is a nice little game (and it’s a good job it is, seeing as there appear to be no plans whatsoever for a new one!).

All in all, though, RoboCop Versus The Terminator, and the arcade versions of the first two movie tie-ins, are well worth your time.

The mighty RoboCop has starred in surprisingly few video games – which is your favourite and why? Let us know!