Duke Nukem is an icon of 90s gaming. Sure, he’s not as recognisable to mainstream audiences as, say, Sonic or Mario, but he’s earned his place in gaming history with his own brand of tongue-in-cheek, OTT shooter.

The series has kept millions of us coming back for multiple adventures across 20 years, but not all of them have been great. In fact, some are spectacularly NOT great, and failed to live up to Duke’s potential.

Still, let’s not focus on them — let’s look back at the top Duke Nukem video games instead … 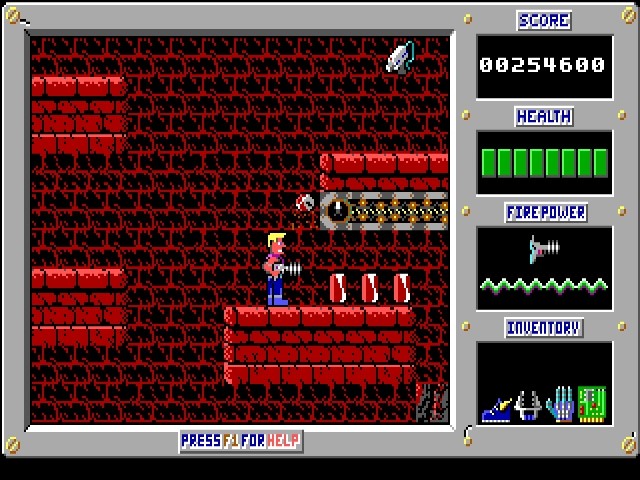 Duke’s first outing came in 1991. Sans sunglasses, Duke has to blast his way through the ruins of Los Angeles (in the then-future of 1997) on his quest to take down the villainous Dr. Proton and his horde of machines.

The first Duke Nukem is completely different to the shooters we’d later go on to associate with the character. It’s a 2D platformer, tasking you with reaching every level’s exit via, taking out enemies and obstacles along the way.

It’s pretty basic and way less exciting than its sequels, but the original Duke Nukem is still an essential part of the franchise. The simple structure, colourful graphics, and straightforward gameplay means it’s still accessible for modern players, so give it a try and see where the franchise started. 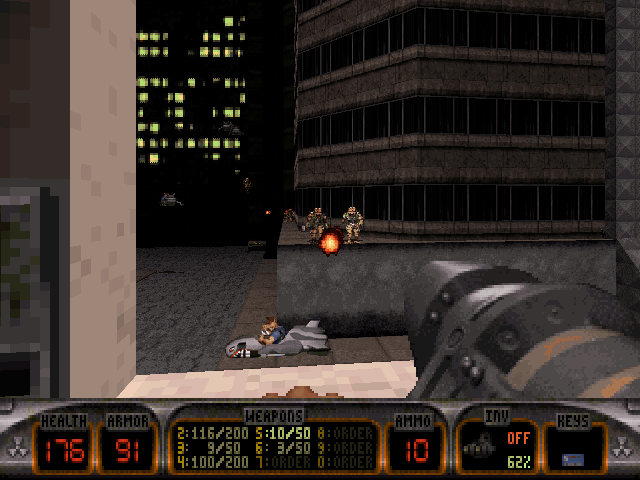 This is where Duke Nukem changed forever and became a smash hit.

Duke Nukem 3D is pretty much up there with the likes of Doom and Wolfenstein 3D in making the first-person shooter what it became — and still is. The graphics and animations might look fairly rough now, but they were stunning at the time, introducing gamers to a harder, more vulgar type of shooter than they were used to.

Duke drops one-liners and quips here and there, referencing iconic movies, making you feel as if you’re actually playing as a unique badass rather than another generic hero with a bland approach to heroism. The sexuality, bad language, and gore helped to make Duke Nukem 3D feel like a more adult version of Doom, though it’s easy to take these touches for granted today.

It’s still worth playing today (depending on the version you go for), and while it’s aged a lot, there’s a lot to enjoy. The mutants, pig-cops, and aliens make for some distinctive, grotesque enemies, while then-innovative features like the jet pack and the hologram are still fun to play around with. 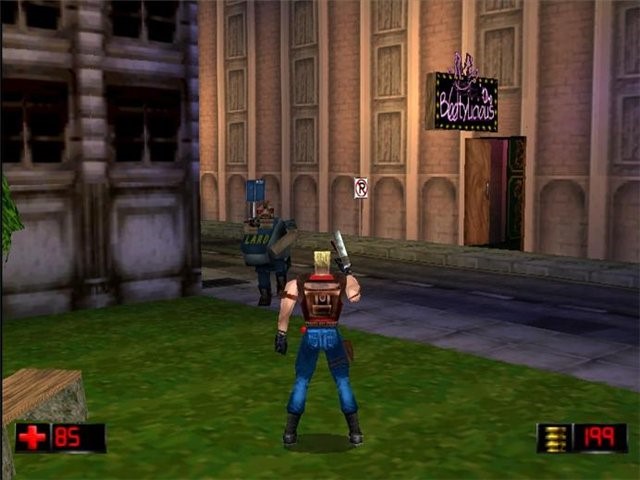 This PlayStation release took Duke from the FPS arena to the third-person one instead.

The Tomb Raider-esque approach to the game was a pretty big departure at the time, but getting to see Duke under your own control put a fresh spin on the experience. The game retained the same humour and darkness that fans expected, and saw Duke travelling to various points in time.

As a result, you get to see the tough-talking hero blasting enemies away in Ancient Rome and the Old West, complete with costume changes and pop-culture references. In the Old West, for example, Duke rocks a cowboy hat and discovers Marty McFly’s DeLorean parked in a cave.

This is a fast-paced action game that still stands as a distinctive, fun slice of Nukem. 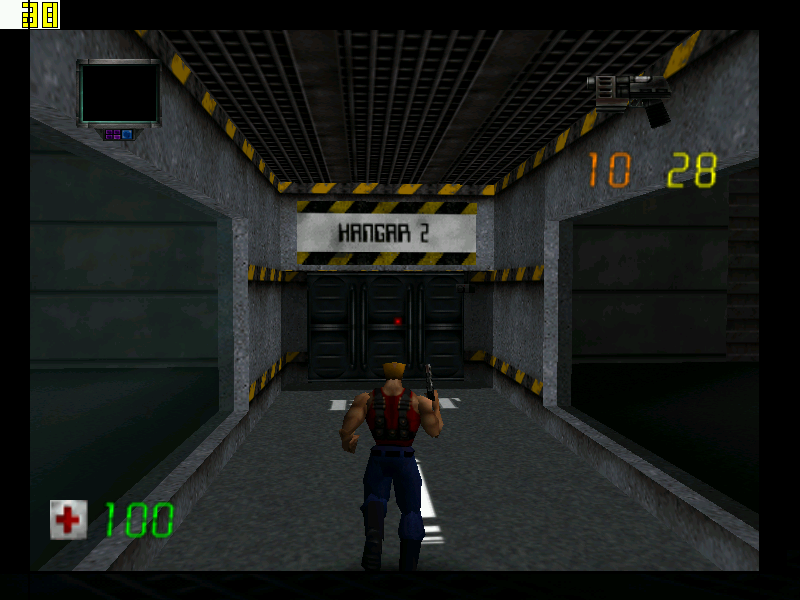 Zero Hour was another third-person outing for Duke Nukem, exclusive to the Nintendo 64.

Once again, our hero’s tossed into a spate of time-travelling shenanigans by pesky aliens, looking to wipe Duke’s ancestors off the planet. The story takes him across more than 30 levels, to a futuristic New York where human resistance-forces are battling invading aliens, the Old West, and the Victorian era.

It’s similar to Time to Kill, with multiplayer modes and a huge range of weaponry to play around with. Freeze-guns, grenade launches, shotguns, and more give Duke plenty to waste his enemies with, and the different eras have their own distinct look. 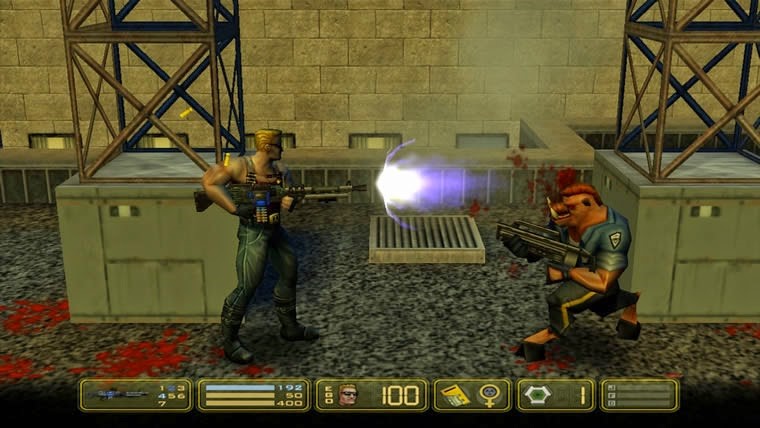 Manhattan Project was something of a step back to Duke’s roots, with side-scrolling action and basic gameplay. Duke blasts through New York City on his quest to take out Mech Morphix, turning creatures into monstrous beings and putting pig-cops in Duke’s way.

This used 3D visuals with movement on a 2D plane, creating a distinctive style of gameplay set apart from the first-person and third-person shooters we all know. It gets a bit repetitive, but it doesn’t outstay its welcome and it throws some more diverse moments of gameplay in there too. 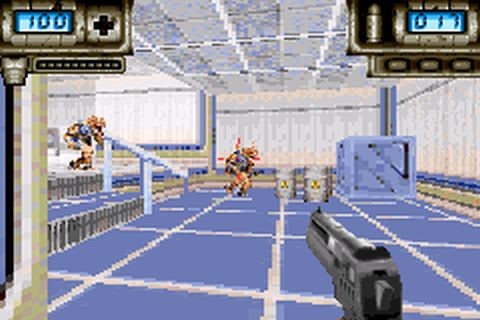 Duke is sent to Area 51 to investigate alien activity, before heading to Egypt. It’s incredibly tough to look at now, but considering this is on the GBA, the game’s actually impressive. It’s pretty fast-paced and smooth, with the usual Duke Nukem run-and-gun gameplay in place.

There are 19 levels to play through, so it’s pretty lengthy, but the hardcore Duke language, black humour, and sexuality is absent. Still, it’s a great use of both the Duke Nukem property and the GBA.

What’s your favourite Duke Nukem game, and why? Let us know!