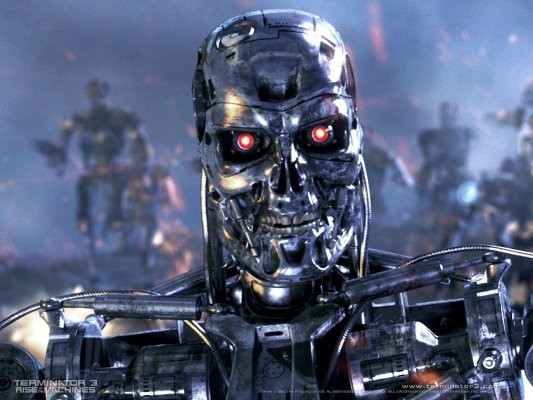 Like it or not, Terminator 6 is going to happen.

The new film in the long-running sci-fi franchise is set to start shooting this summer, and will bring Linda Hamilton back to the action for the first time since 1991’s unbeatable Terminator 2: Judgement Day. Sure, she provided some voice work for Terminator Salvation, but it just wasn’t the same.

Terminator 6 will be the first to involve James Cameron since Terminator 2, and some fans are taking this as a good sign (even though he’s not directing it). After the three weak sequels Terminator fans have had to endure in the past 15 years, they deserve to get a movie that takes the franchise back to its former highs.

You know what else they deserve?

We’ve had some good ones over the years: RoboCop Versus the Terminator, T2: The Arcade Game, Future Shock, Terminator 3: The Redemption, possibly Dawn of Fate, and some of the many adaptations of the first movie have all done decent things with the Terminator license.

Still, it’s been a long, long time since a good Terminator game came to consoles. The tie-in to Terminator Salvation was a gutless Gears of War clone, and there have been a couple of decent mobile games since, though they were both based on Genisys.

However, Arnold Schwarzenegger, Linda Hamilton, and James Cameron’s reunion in Terminator 6 is the perfect catalyst to get a truly outstanding Terminator video game onto consoles. There’s no reason this iconic sci-fi franchise can’t have its own Alien: Isolation (though hopefully one that lands the right sales figures to ensure a sequel!). 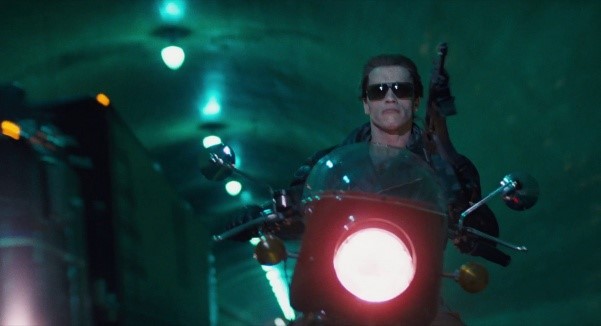 The first two Terminator movies did a fantastic job of exploring time travel, nuclear fallout, war, and fate. Of course, they did it in the context of dark, exciting sci-fi stories packed with unforgettable moments.

Today’s gaming technology could easily deliver an amazing game set in the Terminator universe, especially if it borrowed and built upon these same elements.

For example, imagine being cast as a soldier sent back in time to help protect someone important to the future war. The Connors’ story has been plundered enough (or maybe not, depending on how Terminator 6 turns out), but playing as a lone protector from the future war assigned to help a target in the present would be fantastic.

The game could see you fighting through futuristic battlefields before reaching the time displacement chamber, or it could start in the present and tell the soldier’s story through flashbacks (as the first movie did).

You would be tasked with protecting one or more individuals from a number of Terminators, while accomplishing missions in a living, breathing world. Ideally, this would be set in the timeframe of the original two films, and include cameos from certain prominent characters.

You would have to find ways to avoid the Terminators in densely populated locations and out run them on highways. You would have to fight them off using limited weaponry too (as in Alien: Isolation) and make sure you always stayed one step ahead of them.

There’s real juice in this idea, and in the reverse: letting you play as a Terminator sent back in time to execute people who stand in the way of SkyNet’s campaign to eliminate humanity. You would have to evade the police, keep a low profile, and track down targets through a little bit of cybernetic detective work.

A Hard-Hitting Action-RPG Set in the Future War 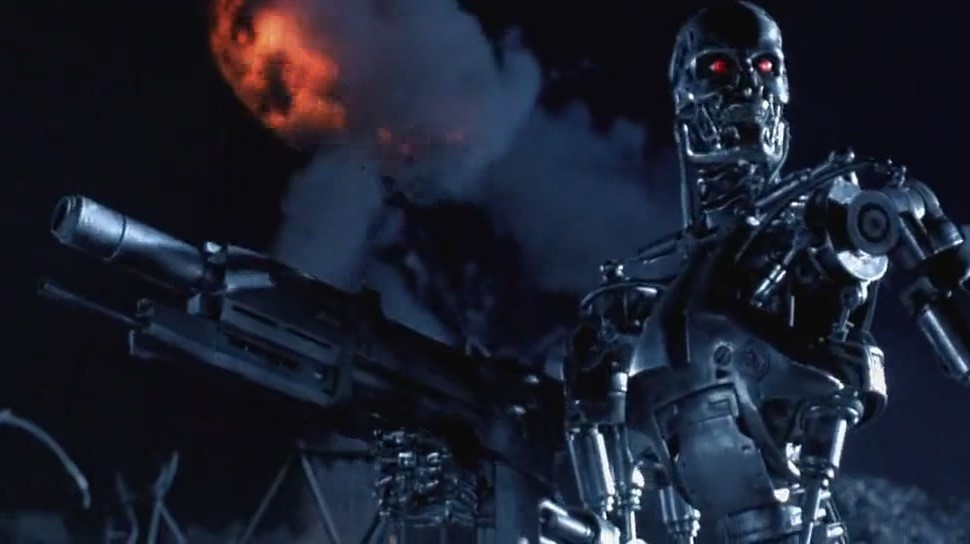 The Future War seen in The Terminator and Terminator 2 is terrifying, and would be the perfect setting for a tense, chilling, atmospheric RPG using cutting-edge technology.

You could take on the role of a soldier fighting as part of a squad, sent out into the field to eliminate Hunter-Killers, take down factories, rescue prisoners, and protect resistance outposts. The gameplay would best sit somewhere between Fallout 4 and Gears of War, mixing high-octane action with a deep narrative.

Alternatively, you could play as a survivor just trying to fend for themselves, scavenging for food and supplies whilst hiding from SkyNet’s forces. The game would let you either join the resistance, help other survivors, or encounter different groups, all while completing quests and building your own story.

Future Shock did a terrific job of recreating the war, but it’s very outdated now. A new game set in the nightmarish world James Cameron created more than 30 years ago could be equally exciting and terrifying, taking the Terminator franchise back to its hard-hitting roots. 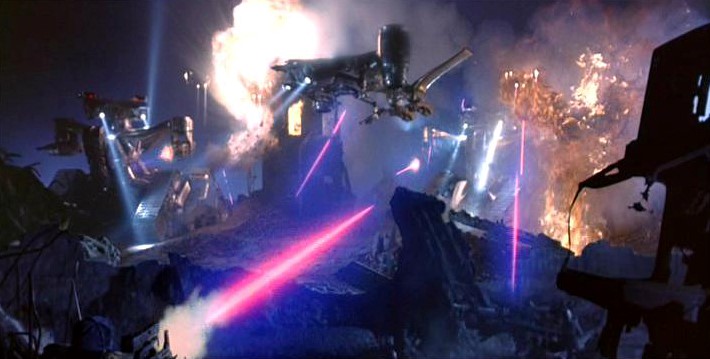 An obvious choice: a game in the mould of Star Wars: Battlefront, but embedded in the Terminator universe.

This was attempted back in 2003, with the ill-fated Terminator 3: War of the Machines. It let you fight on the side of the resistance or SkyNet, but it was so poor it has pretty much been forgotten since.

Imagine jumping onto the back of a truck to blast a Hunter-Killer out of the sky while the driver dodges gunfire and explosions. Imagine steering a HK across a sea of skulls while trying to shoot resistance soldiers running from cover to cover, while an army of endoskeletons roams the ruins of the old world around you.

If this was able to replicate the visual style of the future war in the first two movies – dark skies, pinky-purple lasers, scorched rubble – it could be awesome.

Telltale Games’ Take on the Terminator 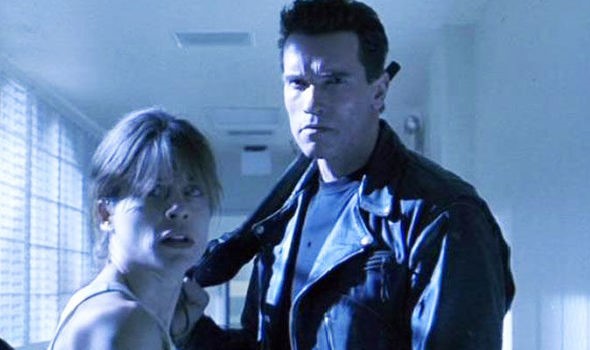 Telltale have proven themselves capable of telling rich, engaging stores in a variety of different fictional universes. Sure, they’ve had the odd misfire (such as their Jurassic Park effort) but if Telltale could apply their Walking Dead magic to the Terminator, it might just be amazing.

The Terminator and Terminator 2 revolved around likeable characters you genuinely root for, which is more than can be said for the sequels. Telltale should aim to capture the same psychological depth and moral complexities of trying to protect a target from an unstoppable killing machine.

Of course, they could always tell a story from the perspective of a Terminator slowly becoming self-aware, struggling to follow its orders in the face of newfound emotions.

A Remake of T2: The Arcade Game

T2: The Arcade Game with HD visuals. A complete remake from scratch, giving us the same fast-paced on-rails gameplay, with the same enemies and environments, only with the gorgeous visuals today’s consoles are capable of.

This might not offer the same depth or emotional power as some of the other possibilities, but the original game is still a blast, and an updated version would no doubt put a smile on fans’ faces.

Of course, the difficulty could be reduced just a little bit for those of us who struggled to get all the way through it …

Terminator 6 is set to start filming this summer, reuniting James Cameron, Linda Hamilton, and Arnold Schwarzenegger. This inspired us to consider where new Terminator video games could go in the future, so check out our ideas and share your own!