Horror games changed forever during the 90s. As technology continued to improve, developers had far more power to create atmosphere and mood at their disposal. Advancing graphics, sound effects, and music all enabled the game-playing experience to become more immersive, more intense, and ultimately more satisfyingly-scary.

Sure, some horror games of the 90s look pretty dated today – just look at the world of difference between, say, Resident Evil and Resident Evil 7 or Alien Trilogy and Alien: Isolation – but that doesn’t mean they aren’t still spooky as hell.

As it’s Halloween season, we decided to take a look back at 10 of the creepiest horror games from the 90s. If you have any of these in the attic or on your shelves, you might want to give them another try – just be sure to leave the lights on … 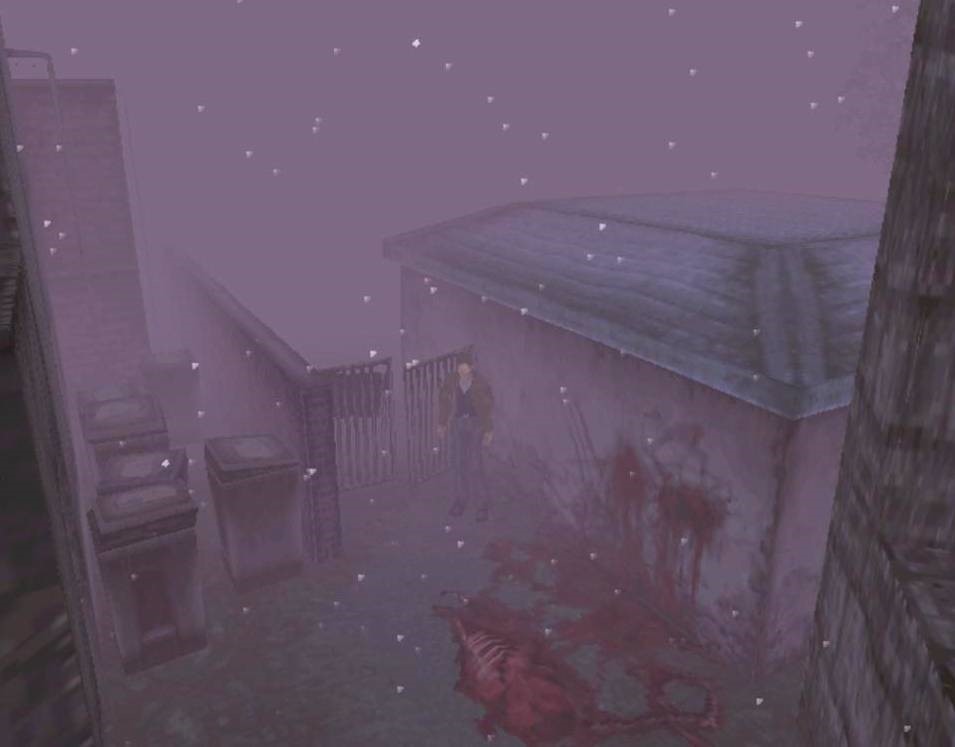 Okay, so let’s get to the obvious picks first: Silent Hill is, of course, on the list.

This is the game that spawned a long-running horror franchise, leading to multiple sequels and spin-offs, two movies, comic-book series, and more. Silent Hills may have gone walkabout, but even if we don’t get the shiny new game we wanted, we’ll always have the original to enjoy.

Silent Hill is a triumph of suspense and atmosphere. From the moment you first find yourself wandering the deserted (or not) town, with that unsettling fog reducing your visibility (a cunning trick to mask a short draw distance), to whichever ending you achieve, Silent Hill still has a deeply unsettling feel horror fans will lap up. 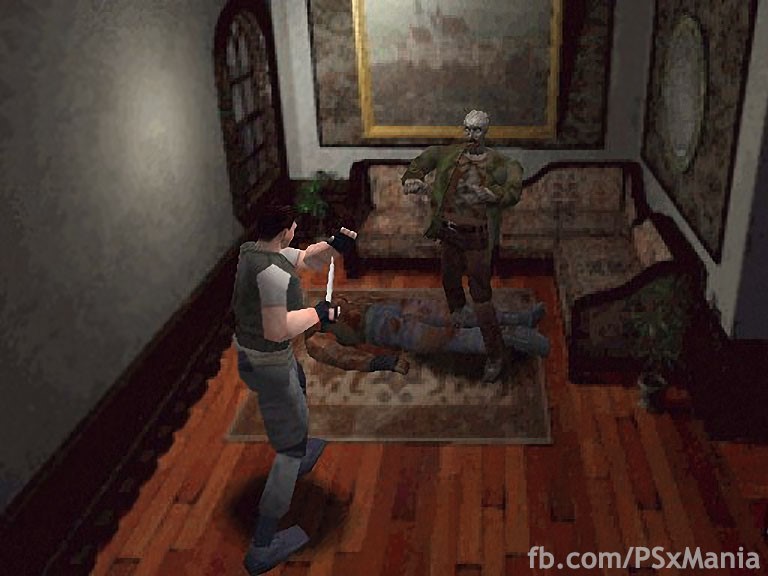 What more can be said about Resident Evil that hasn’t already been said?

Though the original has been remade with updated visuals and less-excruciating dialogue, it’s still well worth playing today (especially if you have the handy Nintendo DS version from some years back, to play it on the go).

Capcom managed to achieve a startling sense of isolation and mounting terror in their first Resident Evil game, which was pretty much gone from the series entirely 20 years later. Luckily, Capcom saw the light and ditched the non-stop-action-and-silly-heroics routine for Resident Evil 7, which delighted hardcore fans no end.

Playing the first Resident Evil today may not be the visual treat it was back in the mid-90s, but the creepy camera angles, sound effects, and music all help to keep it immersive. Being able to hear a zombie moaning or shuffling just out of sight is still enough to put you on the edge of your seat, especially when you’re out of ammo and first-aid sprays. 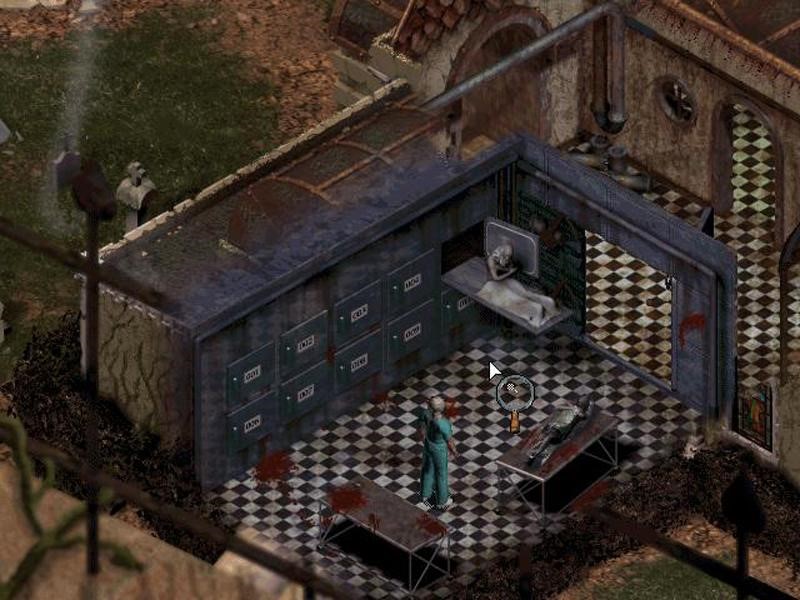 A sanitarium is an obvious setting for a horror game, and this 1998 title was wildly praised at the time for its impressive atmosphere and horror sensibilities.

Sanitarium is a point-and-click game that sees you playing as a man known only as Max. He’s suffering with amnesia following a car crash, and has to figure out who he is by exploring. You’re soon transported to strange new locations with some truly unsettling inhabitants, such as a town populated by bizarre kids and a nigthmarish circus.

You have to solve puzzles and interact with the various people you encounter to piece together your identity. The game’s visuals still look decent today, with detailed environments and well-animated sprites, while the sounds help to reinforce the overall sense of madness and disorientation. 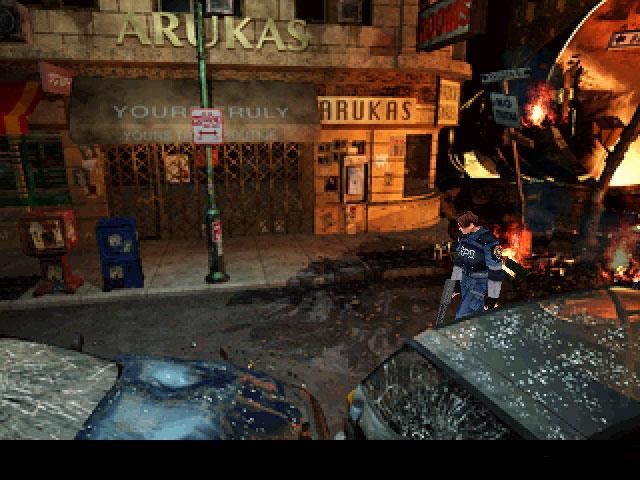 Resident Evil 2 is a bigger, bolder game than the original, and still manages to make you feel entirely alone in the heart of a city.

While it becomes less atmospheric towards its finale, Resident Evil 2’s first half oozes oodles of creepiness: making your way through Raccoon City as it’s swallowed by the chaos of a zombie outbreak; wandering the corridors of the police station; going deep into the sewers, where those monstrous spiders lurk just beyond visibility …

And that’s not even to mention the Tyrant monster that picks some choice moments to show up.

Resident Evil 2 is one of the series’ strongest entries, and looking back at it has us salivating for the remake. 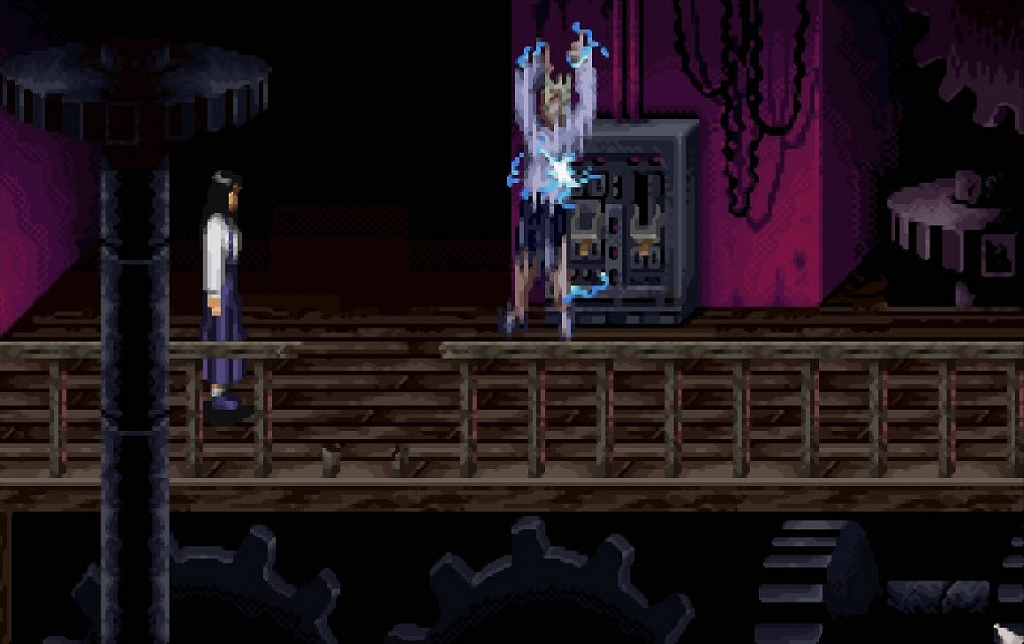 The first Clock Tower game was released in Japan in 1995, and is remarkably effective for a SNES title, making great use of the visual and sound capabilities available to create an atmospheric little adventure. You play as Jennifer, an orphan exploring the titular tower – home to her new adoptive parent, an enigmatic, rich recluse.

Soon enough, she encounters a strange, deformed boy wielding a monstrous pair of scissors, known (simply enough) as the Scissorman. He’s still an unsettling villain, and the consistent threat of being sliced-and-diced by his weapon of choice keeps the game suspenseful.

Sure, Clock Tower has aged quite a bit, but it’s well worth checking out to revel in the creepy atmosphere and horror tropes the Human Entertainment team managed to capture so well.

Alone in the Dark 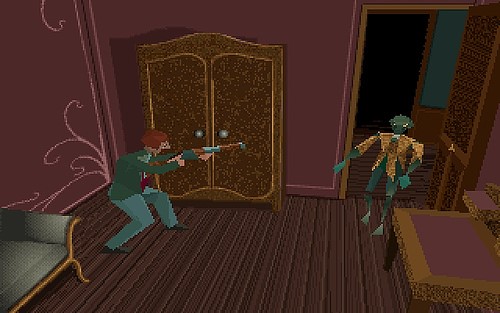 The first Alone in the Dark game made quite a splash, leading to a number of other releases and two films (one of which, of course, was directed by Uwe Boll).

As the first 3D survival-horror game, Alone in the Dark laid the foundations for subsequent hits like Resident Evil and Silent Hill, with a similarly-isolated hero facing nightmarish threats (and some fairly clunky tank controls).

You play as Edward Carnby, a PI on a quest to find a piano, or Emily Hartwood, herself searching for said instrument but for entirely different reasons. The plot deepens and deepens as you explore an ancient mansion and face numerous Lovecraftian enemies.

The game was celebrated for its intense atmosphere, genuine scares, and engaging narrative. It’s incredibly dated today, which is difficult but can’t be helped, yet if you’re looking to delve into the history of horror games or just enjoy an old-fashioned horror experience, Alone in the Dark is a must. 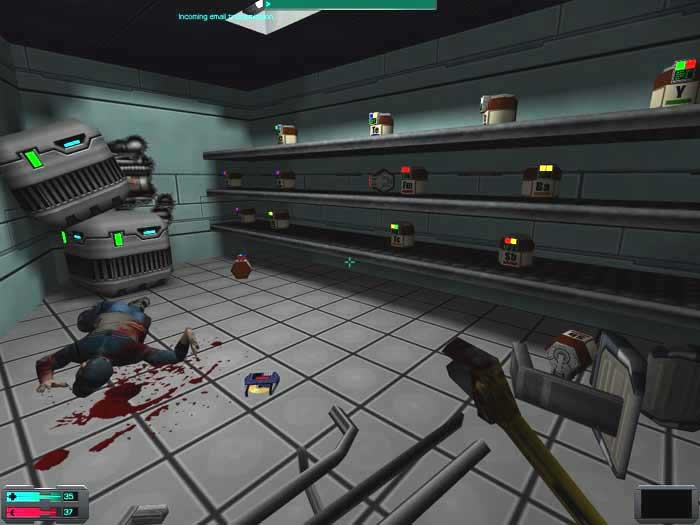 System Shock 2 is a sci-fi survival-horror FPS game with some truly frightening touches, which saw it praised for its intense atmosphere as much for its impressive open-ended gameplay.

You play as an amnesiac soldier on an eerie ship, who has to fend off former crew-members now infected with parasitic worms and part of the Many. These hive-minded enemies have the power to speak with you via telepathy, as they attempt to turn you to their side. The ship’s AI – SHODAN – has it out for you too, and does its best to kill you from time to time.

System Shock 2’s a tough game to play, with the environments, enemies, and the sounds especially blending to produce an experience that’s still powerfully creepy today. 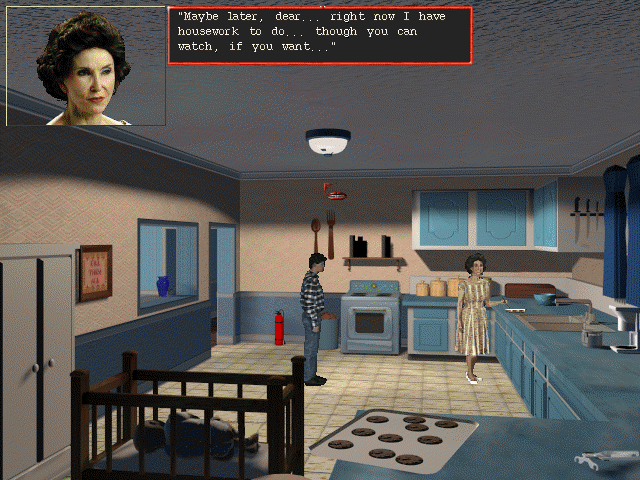 1996’s Harvester is a point-and-click game / interactive movie with some fairly extreme content that saw it censored (and even banned). Though it’s gone on to be something of a cult classic today, it’s easy to see how some people might have been … well, disturbed by some of its darkest moments (not least a mother being eaten by her own offspring).

Protagonist Steve is yet another amnesiac who finds himself in a strange new setting, known as Harvest, which only becomes more and more unsettling as he explores it. The game looks pretty painfully dated today, though this helps to make it even creepier somehow.

The scene in which you have to kill said kids eating their own mother is still freaky, and the bizarre cast of characters help to create an otherworldly atmosphere. It’s not as solid as some of the other games on this list, but Harvester is still one of the 90s’ most interesting horror games – not least for the way it went from being something of a flop to a cult classic.

Worth a try if you want to see how different horror games were 20 years ago. 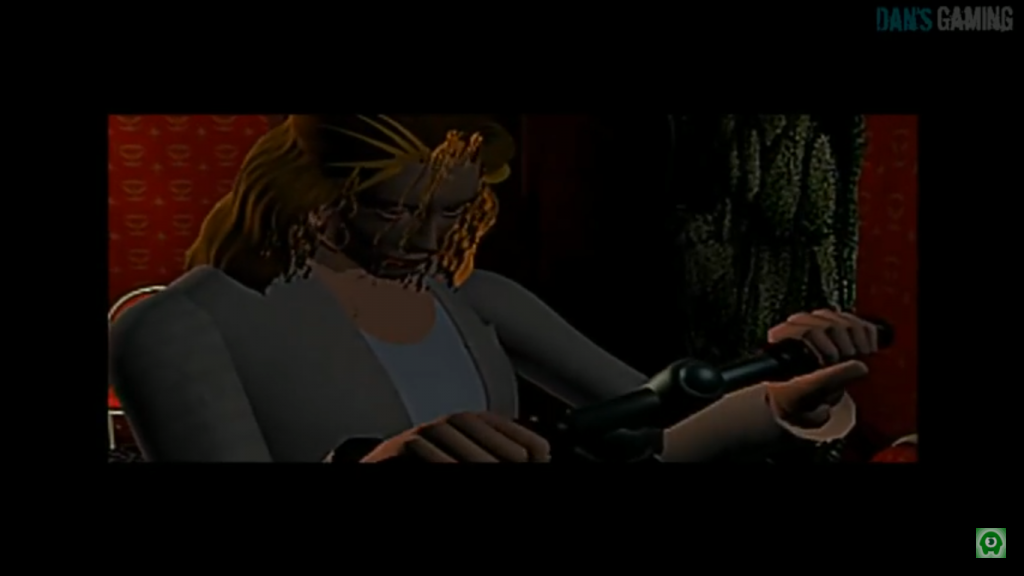 You play as a woman named Laura, whose father has gone on a killing spree at a hospital and locked himself inside … but, as she arrives, said medical institution pulls off the strange trick of transforming into a castle.

With this unfortunate turn of events out the way, Laura has to wander the castle in search of her dad, with only two hours to finish the game (without being able to pause or save). The game’s location, violence, and atmospheric cut-scenes help to make this a riveting experience, and the overall sense of creepiness make it worth digging out again for Halloween. 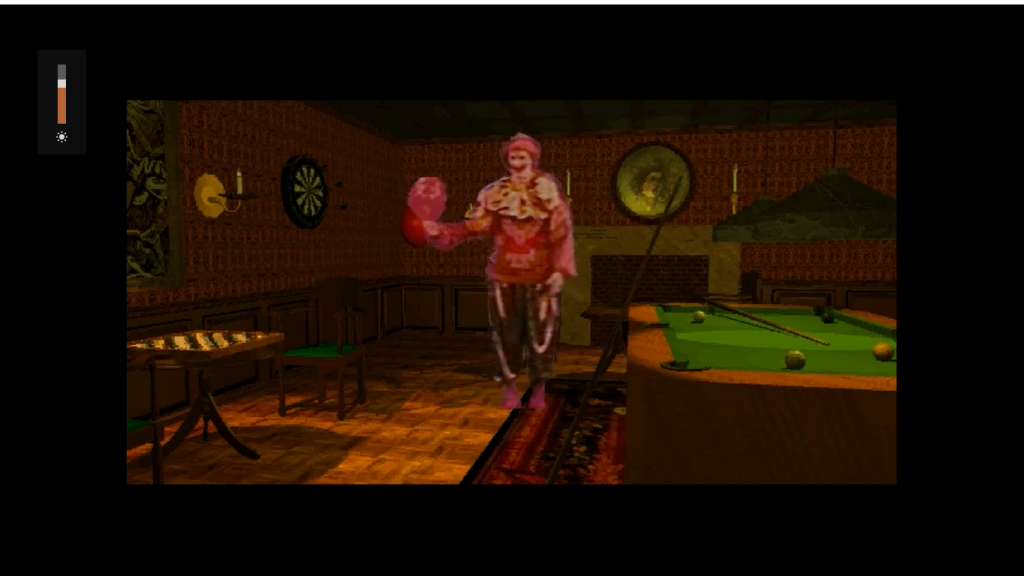 This interactive-movie game casts you as an amnesiac (again!) and sees you exploring an atmospheric mansion, solving puzzles as you go.

The FMV-heavy gameplay feels dated now, but there’s plenty to enjoy here for horror fans, including some strangely gruesome deaths. It oozes a consistent creepiness as you get deeper and deeper into the plot, and it wears it Gothic influences on its sleeve; the music and sound effects are particularly fun.

The point-and-click gameplay’s simple, but the puzzles are fairly challenging and the storyline’s worth sticking with.

What do you think are the creepiest horror games from the 90s? We’ve picked 10, so take a look at our choices and let us know which ones you’d add to the list!